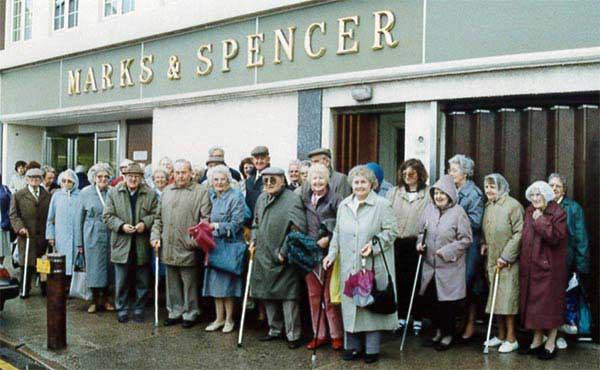 The organisation of the Association was initially through the Rural Deaneries. The Blind Persons Act of 1920 laid on the local authority the obligation to establish registers of the blind.

How things have changed for the better- Jan 27th 1923 A request for £5 towards clothing for Miss Lucy Poole resident in Cotford Mental hospital was agreed in principle provided Miss Poole was removed from the home.

The Organising Secretary, Miss King remained an ex-officio member of the Association from its inception in 1919 to her retirement in 1946/47. Her work was appropriately recognised by the award of the MBE in 1940.  Her own vision was severely impaired and she was a guide-dog user for many years

The list of committee members and helpers reads like a “Who’s Who” of Somerset.  The association was fortunate in the support of the Rt. Rev. Charles de Salis, D.D., Bishop of Taunton, who was President of the Association from 1920 to his death in 1941.  The family connection with the Association was continued when Count Charles de Salis was elected President in 1986 following in the footsteps of Colonel Cecil Mitford-Slade who had been involved in the association for many years, having been President in 1975.

Following the example of the Western Counties Regional Association, home teachers were appointed to look into specific training problems encountered by the blind. Social support and advice were also provided, particularly during the war years when help was required with gas masks and blackout precautions. On 19/9/25 the association transferred £59 received from fundraising at a charity football match and £100 annual subscription received from the national institute for the into a new account set up to pay for the services of a home teacher to work in East Somerset. The organisation provided her with a bicycle to make her visits. In 1926 a second home teacher was employed and the association decided to buy this teacher a car (an Austin 7 £167-17-8) in order for her to be able to travel further distances and reach more people. In the following year another 2 teachers were employed and all 4 of them were provided with an Austin 7.

Frequent mention is made in early reports of promotion of the British Wireless for the Blind Fund which is still in existence; the agent for Somerset is based at Northfield House supplying radios and support to the registered blind.

Activities and socials still run regularly across the County. Although many changes have been made we are committed to providing social opportunities to visually impaired people of all ages and have started working with our families with VI children.

In 2010 we were extremely fortunate to receive funding from the Big Lottery Fund to pay for all running costs for the Mobile Resource Unit for the following five years. 8 years later we still have funding and the newly branded Mobile Advisory Service is busier than ever before.

Reviewing the past 100 years of the organisation, it is impossible to over-stress the debt of gratitude we owe to the numerous volunteers who devote so much time and energy into helping blind and visually impaired people in Somerset to continue to live full and independent lives.